We raise all of our animals right in Hopewell, New Jersey, on over 800 acres of owned and leased land.

The farm raises pigs, sheep, chicken, ducks and turkeys. The animals on the farm are raised on pasture in a rotational grazing system. This means they have some access to shelter, but are primarily on the open land, moving often (sometimes twice a day!) and foraging for part or all of their diet.

Our beef and sheep are 100% grass fed. Our pigs, chickens and turkeys supplement their foraged diet with a locally grown feed of corn, soybeans, flax, alfalfa and minerals. 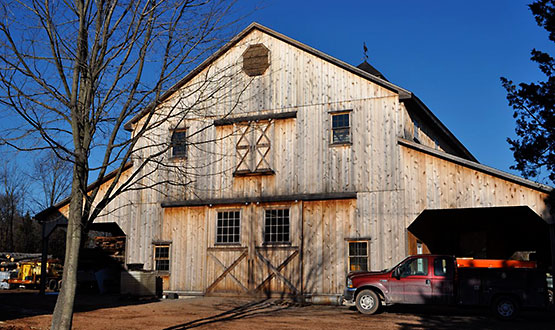 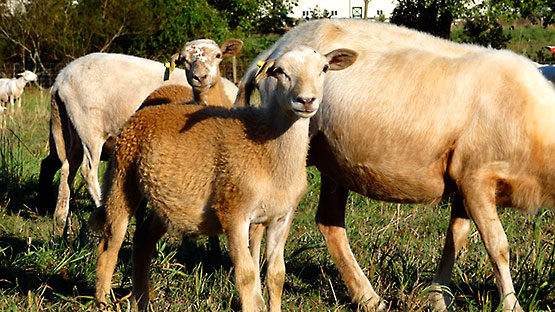 The Katahdin is a breed of sheep called a ‘hair’ sheep. That means they do not have wool, just a coat of hair that gets a layer of dread locks in the winter.

The sheep come in all colors. A medium-sized breed, the Katahdin produces superior meat when raised on pasture. Lambing season is a lesson in organization as the flock is generally increased by close to 200%.

Katahdin were a developed as a cross between what was called the ‘African Hair Sheep’ and many other traditional breeds such as Suffolk, Hampshire and Southdown, starting in 1957.

The man behind the evolution of the Katahdin was Michael Piel of central Maine. Piel refined his breeding stock over the years, naming the resulting hair sheep ‘Katahdins’ after Mt. Katadhin, the highest peak in Maine.

These feral-looking pigs are the descendents of the highly prized Iberian pig brought to our eastern shores with the Spanish explorers over 400 years ago. They are medium-sized pig with a long snout and looks that only a mother could love. But it’s the taste of the meat that had us waiting for months to take delivery of our first breed stock. The flavor of this ancient breed inspired Slow Food USA to add it to its catalogue the ‘Ark of Taste’, which lists heritage breeds in danger of extinction. Another heritage breed from England that adapts well to outdoor farming, The Berkshire pig is a hardy, large swine with natural mothering capabilities. An excellent grazer, Berkshire meat is known to be rich, savory and a bit darker than other breeds. Aside from exceptional flavor, Berkshire meat is well-marbled, juicy and has outstanding texture. Artisanal Berkshire meat is the most sought-after pork in top restaurants today. At the farm we have two main breeds of chickens. The Freedom Rangers are slow-growing bird that, you guessed it, does great in a free-range environment.

They are active birds that enjoy scratching into the dirt and foraging for grasses and bugs. Their long hatchling-to-market time (approx. 12 weeks) gives them a rich, deep flavor. 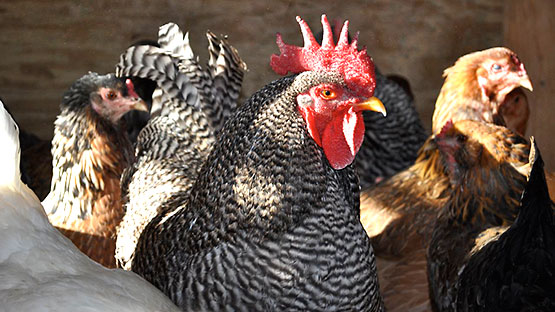 The Rhode Island Reds are dual-purpose breeds. They both lay brown eggs, but are also heavier birds than the Ameraucanas with exceptionally flavorful meat.

Our chickens will be doing double duty in the spring when they are turned out to pasture to follow the cows’ rotational cycle. All those grasses and protein-rich bugs make the meat and eggs from these birds taste like buttah. (Or just like really good chicken and eggs). Have some and you’ll see what we mean.

The turkeys are by far the most social animals on the farm. All our turkeys are kept in a free-range outdoor pen until they are big enough to defend themselves against predators. After that time, they can be found roaming all over the farm – even looking in the windows of our house

We typically only raise the turkeys for Thanksgiving and Christmas but popular demand may change all that. We’ll keep you posted. The main differences in the breeds are in size and time to maturity.

The Broad-Breasted Whites and Bronzes put on weight very quickly. They get much bigger than the traditional heritage breeds and have a lighter-colored white meat. 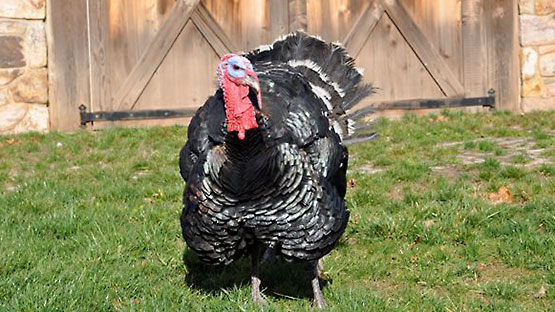 The other heritage breeds such as Blue Slate, Black Spanish, Narragansett and Bourbon Red are slower to mature, grow to a smaller full size and have darker ‘white’ meat than the broad-breasteds. 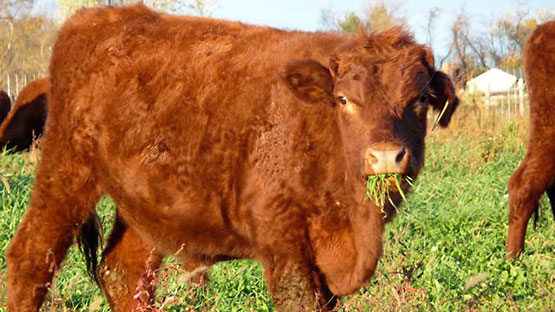 The Devon, from southwest England, is one of the oldest beef cattle breeds today and it is known in many circles as the best beef cattle for pasturing. It is a red, or chestnut, colored medium-sized breed with a gentle temperament. Males weigh from 1,600 to 2,200 pounds and females weigh in at 900 to 1,400 pounds.

The Devon is a triple-stock breed, meaning that it is prized for quality beef, milk and drafting. Here at Double Brook Farm, ours are raised on pasture purely for beef.

Did you know that a Certified Black Angus only has to be a minimum of 51% black and exhibit an Angus influence? This had very little to do with genetics and more to do with aesthetics. No so the Devon cattle. Genetics are extremely important to the breeders and sellers of US Devons. Animals registered with the American Devon Cattle Association, are all 100% pure Devons.

**At present our calf-cow pairs are being tended by the Lakota Ranch in Virginia and the steers are being raised by Thistle Creek Farms in Tyrone, PA – both 100% grass-fed, sustainable operations with substantial land for pasturing cattle. For a better explanation on why we have moved our cattle, please see this blog post.